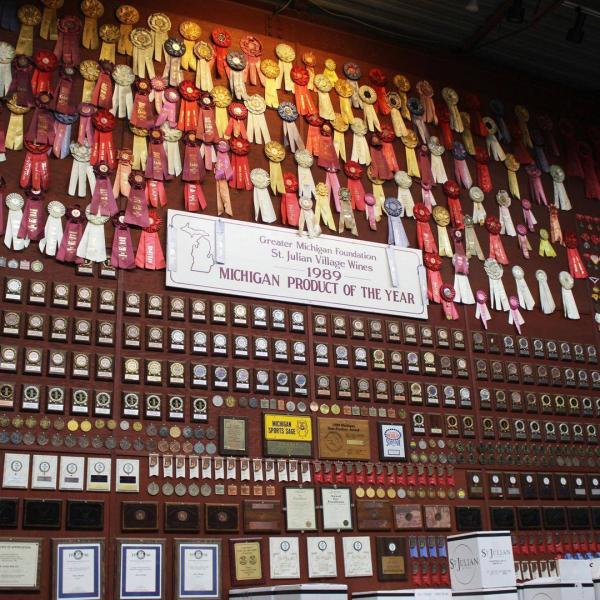 (PAW PAW, Mich) — As Michigan’s largest and longest operating winery, St. Julian Winery is also recognized as the most award-winning, with thousands of medals adorning the walls inside its Paw Paw production facility. This spring, 15 additional awards were added to that wall of fame including “Best of Class” in the 2021 International Women’s Wine Competition in Sonoma County, California.

“Most notable women winemakers started their careers in the lab, and like them, I did not want to limit myself to that position,” notes Nancie Oxley, who has worked her way up at St. Julian since 2002 to now serve as Vice President of Winemaking. “Since taking over the winemaking helm here 10 years ago, the winery has garnered more medals that the previous decade and it is an honor to be recognized among a group of world-class women winemakers.

“Like all the women in predominant roles here at St. Julian, we had to work hard for our level of success by being quality-oriented self-starters who are passionate about our work,” Nancie says. “We continue to embrace the incoming women by encouraging, opening doors for, and mentoring them as they too become successful in their careers.”

Women have always been a strong part of the story of St. Julian Winery, starting with Avelia – the wife of founder Mariano Meconi who started the company in 1921 as Border City Wine Cellars in Canada. Today, the company proudly supports a growing number of female leaders as noted in “A Toast to the Women of St. Julian” from Women’s History Month.

“Rosé wines have been a passion of mine for several years,” notes Nancie. “Each vintage, we select different varietals to push the limits on rosé winemaking – whether the final wine is dry, sweet, skin-fermented, or even bubbly. Rosé are delicious any time of year, but they are perfect on a warm summer day!”

Earlier this year, St. Julian earned 13 medals – including two “Best of Class” Gold Medals – at the International Eastern Wine Competition held in February in Santa Rosa, California. St. Julian was one of just 10 Michigan wineries to participate in the competition, collectively bringing home more than any other state producer. In all, 72 medals were earned by wineries from the Great Lakes State.

For 100 years, the iconic St. Julian Winery & Distillery has been making wine, cider, and spirits in a range of styles to meet every customer’s taste. Now helmed by third and fourth generation Braganini family members, the company is committed to making authentic wine from the Lake Michigan Shore. As the largest and best-known winery in Michigan, St. Julian has led the local industry in both innovation and quality from the very beginning. From its wildly popular Sweet Revenge and Envy wines and the Braganini Family Reserve Wines, to its growing line of distilled spirits, ciders and sparkling juices, St. Julian has something for everyone.